Towel animals, folding towels into homemade gifts, towel totes, dresses and cover ups are just a few of the amazing things to make out of bathroom towels!   You’re going to love these towel origami gift ideas made out of tea towels and bathroom towels.  They’re cheap, durable, and adorable! 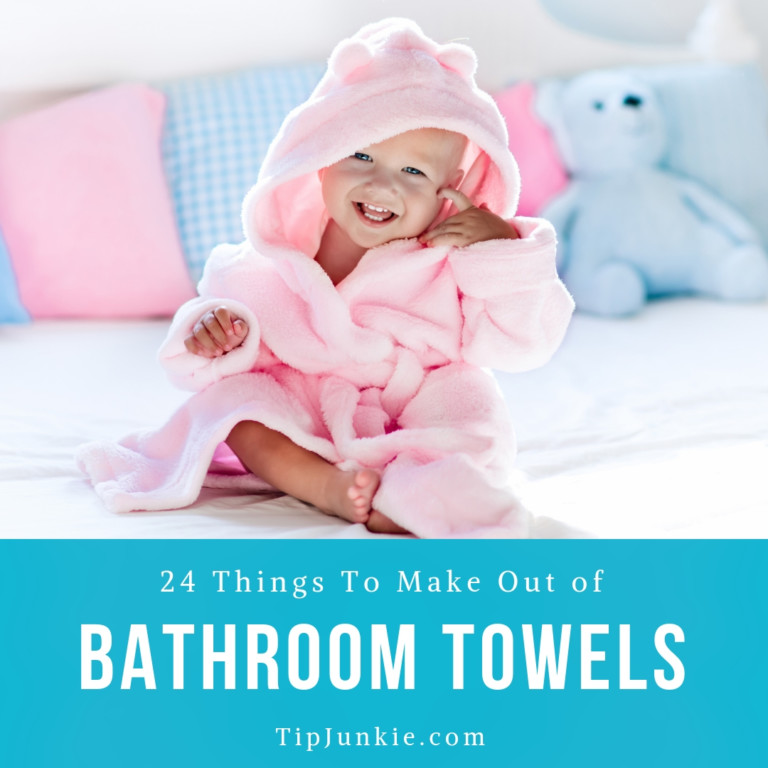 First up on this creative list of things to make are towels you can repurpose to wear like robes, dresses, cover-ups and more. 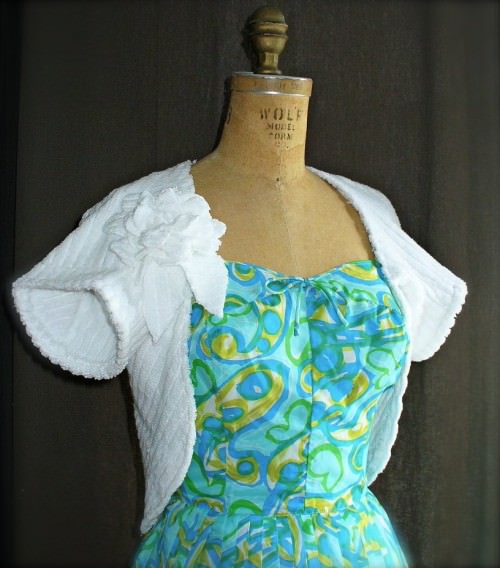 1.   Beach Cover-Up Made from an Old Towel ~ I adore this beach cover-up!  I think it would be cute paired with a summer dress. Especially, for those cool summer evenings. 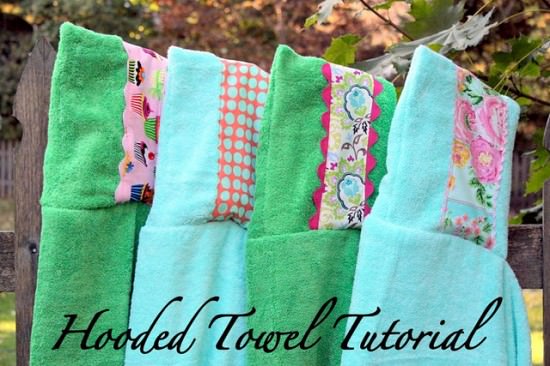 2.  Embellished Hooded Towel Tutorial ~ Make a statement with these absolutely adorable hooded towels.  Customize the towel with ribbons and ric rac or embroider an initial or name.  These would make fantastic gifts.

3.  Kids Swim Cover Up {Tutorial} ~ I have to admit, Im not the biggest fan of the kids swim cover ups that look like big towels or robes.  But even I have to relent on this  its pretty dang cute.

4.  How To make a Beach Towel Dress ~ This fashionable beach towel dress is made from non-other than a beach towel.  It would be perfect as a bathing suit cover-up for the beach or pool.  There’s even a free sewing pattern. 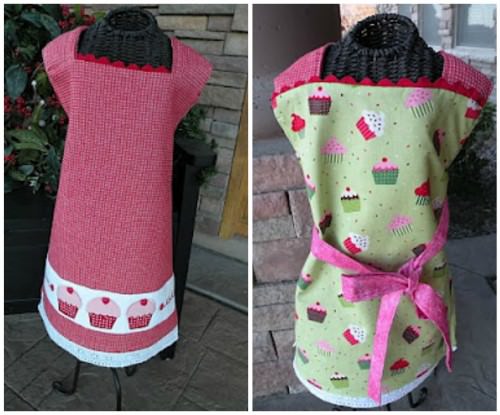 5.  Reversible Kids Apron From Dishtowel {tutorial} ~ Follow along with Brendas simple steps for transforming a dishtowel into a reversible kids apron.  Since you can always find a wide range of dishtowels for different holidays, this is a great go-to gift no matter what time of year it is. 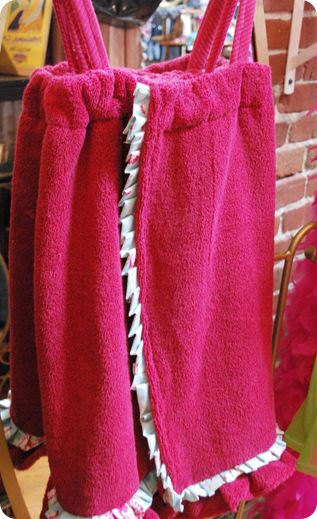 6.  Spa Towel Wrap ~ These fabulous ruffled spa towel wraps are perfect to wear after a shower.  Add straps to your childs mini-wrap and leave yours strapless.  They are a fraction of the cost of a store bought wrap! 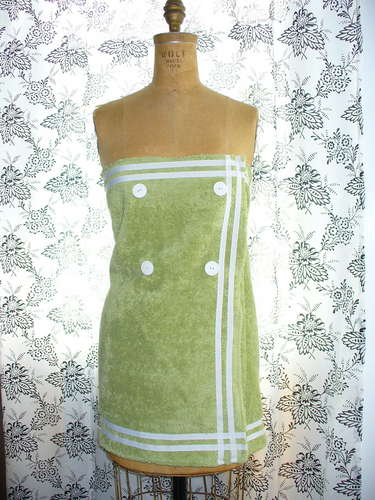 7. Beach Sarong From An Old Towel ~ The added ribbons and buttons give this old towel an exemplary look.  Cover-up at the beach with this or wear after a shower.  There is a free pattern. 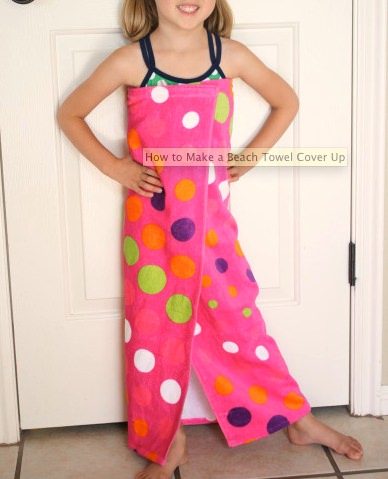 8.  How To Make a Beach Towel Cover Up ~ Wear this cute cover up as a cape or a wrap!  The added velcro makes it super easy for your child to wear. 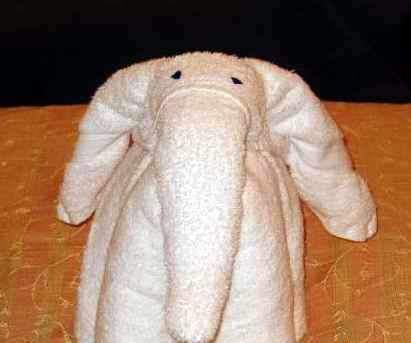 9.  How To: Fold a Towel Like an Elephant  ~ If you have ever had the pleasure of going on a cruise these animal shapes will look familiar.  Follow these simple 7 steps to make your own elephant. 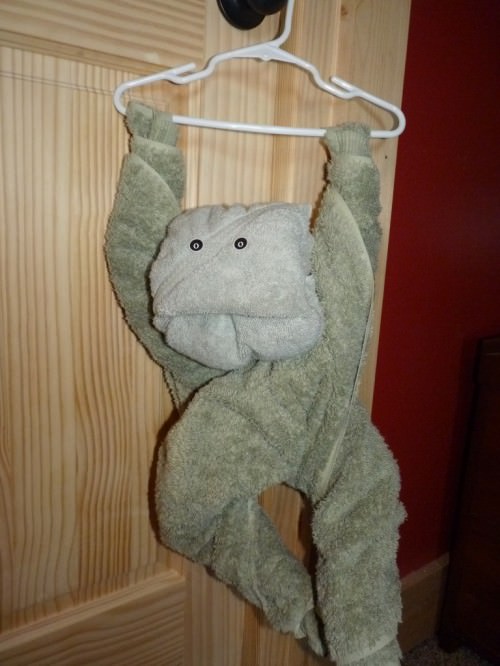 10.  How to make a Monkey Towel Animal ~ Isn’t this monkey towel adorable?!  You can make your own using a bath sheet, hand towel and safety pins. 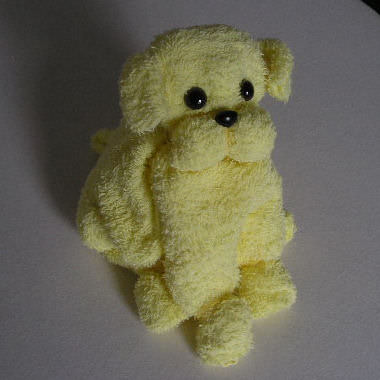 11.  How to Make  Dog Towel Animals ~ How much is that doggie in the window?  So adorable!  No sewing or cutting needed for this dog. 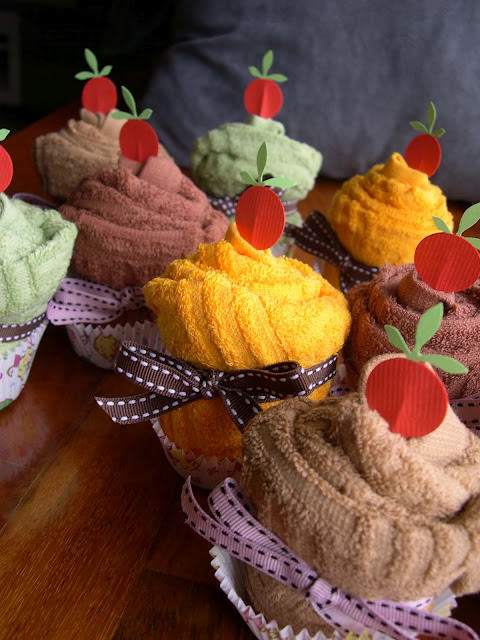 12.  Tea Towel Cupcake Tutorial ~ I made these as little gifts for a housewarming gathering recently. Theyre little Tea-Towel Cupcakes aka towelettes disguised as cupcakes! LOL! Have fun making them! 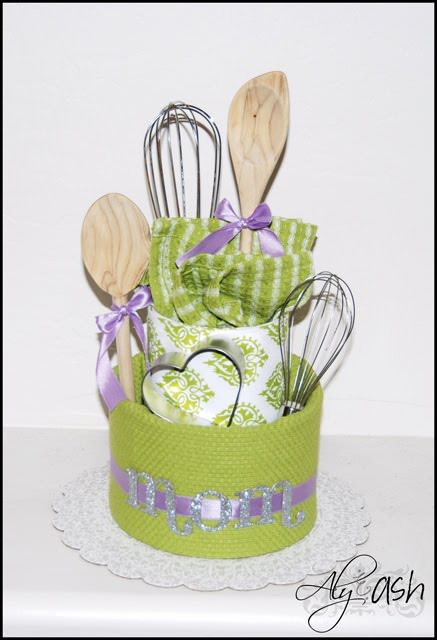 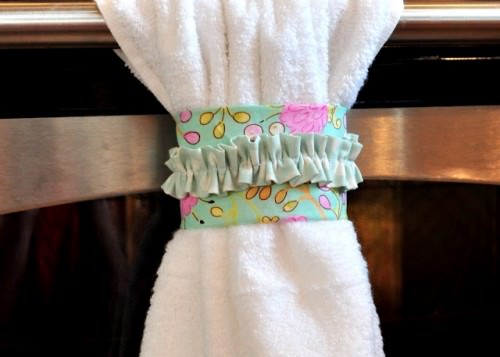 14.  How To Make Dish Towel Belts ~ Keep your kitchen dish towels hanging with these adorable towel belts.  They are a great way to use up some of your scraps.  Embellish them with ruffles, rosettes or bows.  These would make terrific housewarming or bridal shower gifts. 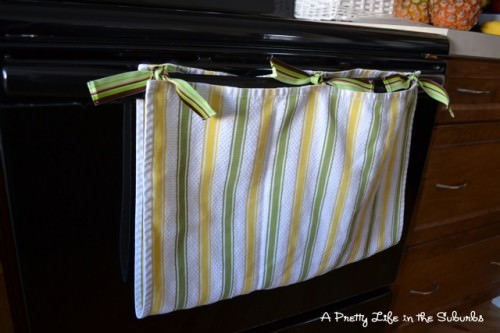 15. Ribbon  Tea Towel Solution ~ Keep your tea towels safely secured to a stove handle with these added ribbons.  Little hands sometimes make them disappear.  Or, maybe you just want to add something pretty to your kitchen. 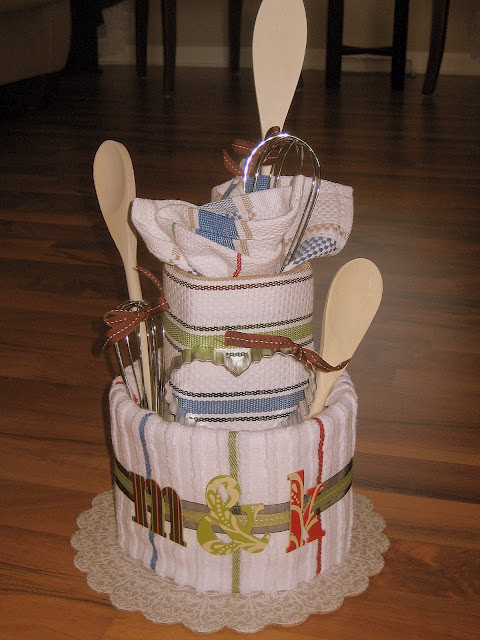 16.  Tea Towel Bridal Shower Cake ~ Instead of a box full of towels and kitchen utensils, give this fantastic cake at your next bridal shower.  The base is made out of recycled cereal boxes. 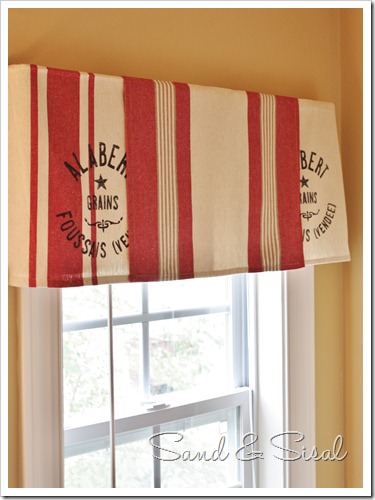 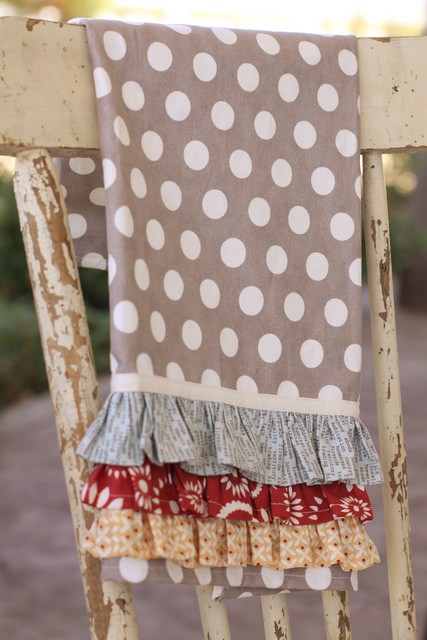 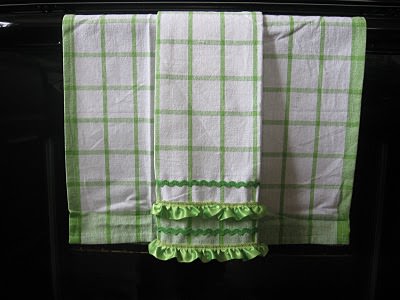 19.  Ruffled Tea Towels {Sewing How-To} ~ Dressing up inexpensive tea towels with some ruffles and ric rac make a great house warming gift for a new neighbor or old friend.  Throw in a plate of homemade goodies and you have a simple gift that anyone would enjoy. 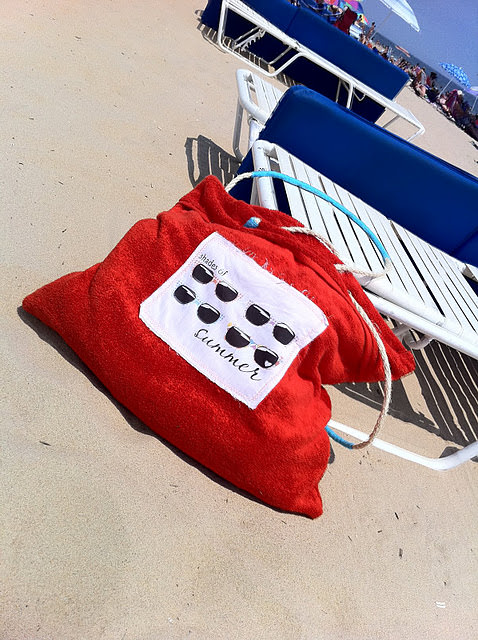 20.  How To Make a Towel Tote ~ This towel tote is not only a tote, but also a beach towel.  Perfect for a day at the beach or at the pool.  There are inside pockets to store other items like lotion, cell phone or car keys. 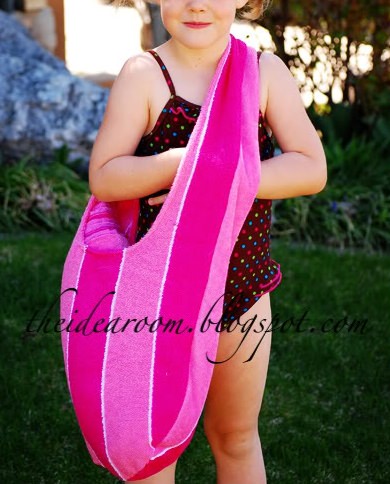 21.  Swim Bag and Matching Towel Tutorial ~ Are you tired of packing EVERYONES stuff to the pool or beach? Want to make someone special their very own sling swim bag to carry their essentials (matching swim towel, sunscreen, and goggles) to the pool or beach this summer? Now you can.

23.  How to Make a Beach Tote Blanket  ~ Do you have some old towels you would like to use or re-purpose?  You can make one of these beach blankets using four old towels. 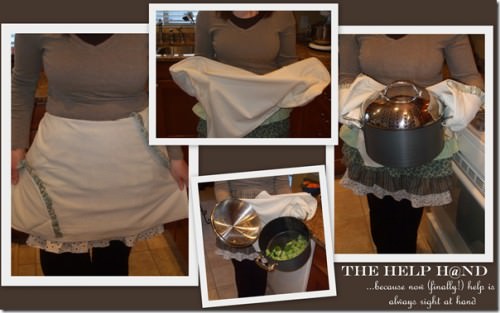 Thanks Ladies! I just adore these ideas! Feel free to grab my I was featured on Tip Junkie blog button. You earned it! {{knuckle bumps}} Also, dont forget to check out the Tip Junkie Facebook page for even more activities for kids, creative ideas, and free tutorials.

Also, If you have an activity youd like featured, feel free to submit it to the Tip Junkie site. It just takes a second. {wink} 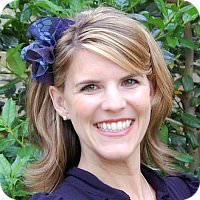