This is a list of possible games you can plan for a Star Wars birthday party. 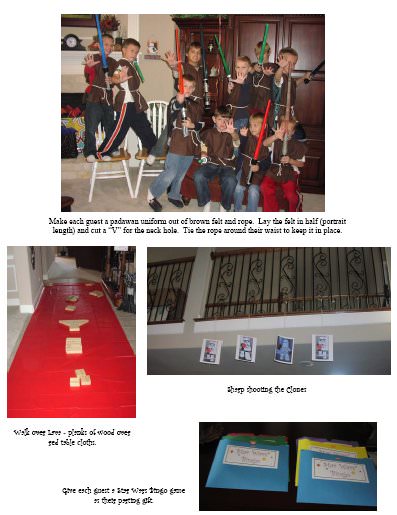 Jedi Training Course
*  Create an obstacle course
*  Tetherball
*  Short net to jump over
*  Cones to run around
*  Limbo pole
*  Dagoha tunnel – green material shreds hanging down from the top of a long cardboard box
*  Walk over Lava – planks of wood over red table cloths.
*  Black Hole – large cardboard box painted black inside and out with small holes poked through to simulate stars.  Use silver tongs to retrieve small prized wrapped in black paper.

Decorate Pod Racers and then race them

Pin the Saber on Yoda

Save Princess Leia:
*  Put a figurine of Princes Leia in a balloon. And blow it up.
*  Blow up several balloons and put them in a garbage bag.
*  Dump out the bag and start an egg timer to see if they can rescue her by popping all the balloons to find Leia before time runs out.

Defeat the Death Star
*  Draw three death stars in chalk on driveway.
*  Draw for three teams
*  Stand at boundary line a few feet away and try to erase the other teams deathstars by throwing water balloons.

Destroy the Death Star
*  Copy a picture of Death Star and glue it to a poster board.
*  Have the kids use bean bags to try and knock it down.

Release Han Solo
*  Freeze two Han solo figurines in a rectangular container filled with water.
*  In the movie The Empire Strikes Back Han was frozen in carbonate and we are going to release him from his icy prison.
*  Divide into two teams and form a bucket brigade line by dunking small buckets (one to each team( into large water-filled buckets.  Pass down the line and pour over frozen Hand.
*  The first team to release Han won.

Thermal Detonator Pass
*  Three round containers spray painted copper.
*  Play musical chairs with Star Wars music.
*  Who ever is holding the detonator when the music stopped could open it up and get a piece of candy.

Certificates of Jedi Completion:
The Jedi Council of the Turk Galaxy Presents (childs name) the title of Jedi Master in recognition of your excellence and bravery in fighting the dark side and defending the Universe. (red ribbon around each) 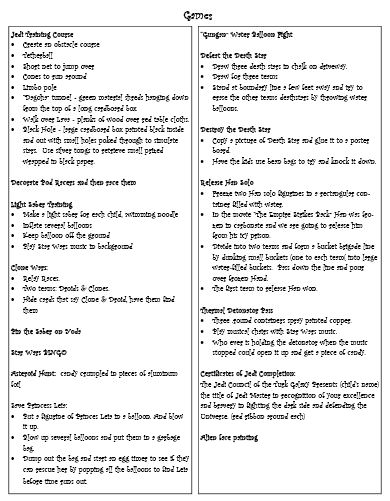