Art comes in many shapes and sizes. In Johanna WrightÂ’s case, her latest artwork is on display in her debut childrenÂ’s book, The Secret Circus.

For Talk to Me Tuesday today, Francesca from the Three Bay B Chicks interviewed Johanna about her journey from an artist on the streets of Manhattan to a published childrenÂ’s author and illustrator.

Given that the Three Bay B Chicks are in the midst of We Heart Art this week, an event focused on promoting fellow bloggerÂ’s (and their kidÂ’s) artwork and creative outlets, the timing for this interview could not be better.

Johanna Wright was born and raised in Eugene, Oregon, underneath the shadow of very big and beautiful trees. Her childhood was spent in the home where her parents continue to reside today.

Johanna received her BA from Evergreen State College in Olympia, Washington in 1998, in puppetry and childrenÂ’s books, and moved to Brooklyn shortly after graduation. During her time on the sidewalks of New York, Johanna sold thousands of original paintings, honed her illustration skills, and appeared in numerous magazines and publications. These days, Johanna came be found in Portland, Oregon, where she spends most of her time painting.

Q. What inspired you to write your first book?

A. I have wanted to write and illustrate children’s books for a long, long time. I was around seven years old when I first thought that this might be something that I could do for a living. I have written and illustrated many books over the years, but The Secret Circus is my first to actually be published.

Q. Tell us about your major in college. Is there any connection between what you studied in college and what you are doing now?

A. The curriculum at Evergreen College in Washington is very unusual, but also very interesting. The school allowed me to design my own learning program, which I decided would focus on puppetry and children’s books. The program was a good fit for me since I was kind of all over the place in my late teens and early twenties. I doubt I would have lasted very long in a traditional school.

The most valuable lesson that I learned at Evergreen was how to be a self-starter. I developed the confidence to get things done on my own and learned how to avoid taking the traditional road to reach a goal. This attitude has helped me in my art and writing career more than anything else!

Q. Growing up, what were your favorite books to read?

A. Anything by Judy Blume, Beverly Cleary, and Ronald Dahl. I know all of their books by heart. I also loved From the Mixed Up Files of Mrs. Basil E. Frankweiler, and anything that revolved around Â“small worlds,Â” such as The Littles series.

Q. Who are your favorite childrenÂ’s authors now and what is it that really strikes you about their work?

A. I have so many favorite writers, but a special place in my heart belongs to Beverly Cleary. I admire her brilliant, simple, funny, and compassionate writing. Her work is so special and really spoke to me as a child.

My favorite illustrator would have to be Erroll Le Cain. His work makes me cry; it’s beyond beautiful. I don’t even know how to describe it…it’s just magical.

Q. What books are on your summer reading list?

A. I’m behind on my reading right now, so my list is quite long. Here are a few books that I am looking forward to checking out. (They are all childrenÂ’s books, of course.)

Q. What was the hardest part of writing your book?

A. I must admit that actually writing the book wasn’t my biggest challenge, since the text is very simple. In addition, I took a few children’s writing classes in New York about five years ago that taught me how to pare down my writing. For me, the hardest part of creating a book is making the illustrations interesting, beautiful, and accessible on several different levels. It’s by the far the most difficult and rewarding part of the book process for me.

Q. What were your inspirations for your illustrations in The Secret Circus? What influences your artwork/illustrations?

A. The Secret Circus is a combination of a lot of things. When I look through it, I can see bits of my life peeking back at me. For example, the painting style that I used for the book is a combination of a textured background, which I learned while living in New York, overlaid with an inky, cartoon style. My inky, cartoon style evolved while I was making watercolor postcards on the streets of Manhattan. I did this for four years, and got really good at drawing quickly using pen and ink.

I’ve also always loved small worlds and tiny things, which is probably why I was interested in using mice in this story. When I was a kid, I would spend hours and hours building little homes in the grass or in secret parts of the living room for tiny dolls. It was my favorite game, invented by my older sisters. We called it ‘Little People’ and spent endless amounts of time collecting bits of fabric and tiny things to add to our little worlds.

Finally, the Paris setting and the circus aspect of the book may be attributed to the romantic thoughts I started having about Paris a few years ago when my husband and I were planning our wedding. At that time, I became infatuated with the idea of honeymooning in Paris…the cobbled streets, the circus performers, the smell of french bread wafting through open windows. But, believe it or not, my husband and I never did make the trip. I have a sneaking suspicion that the book might not have taken shape if we did. My visions of Paris needed to remain a fantasy in order for me to continue to feel inspired and wistful for this dreamy place. I did a lot of research about Paris, though. For example, the carousel that you see in the book is based on an actual carousel in Paris.

Q. What are your current projects?

A. Right now I am working on two new children’s books. One is entitled BANDITS and will be published in the spring 2011 by Roaring Brook Press. The other is called BIKE and will be published by Dial in the summer 2011. I’m also working on a chapter book for older kids. This is a new endeavor for me because I’m used to writing picture books. It’s a very exciting change!

Q. Do you have any advice for other writers?

A. I guess I would say keep going. Even when everything feels like a mess, just continue writing! Be your own leader, tell your story…you can do it! 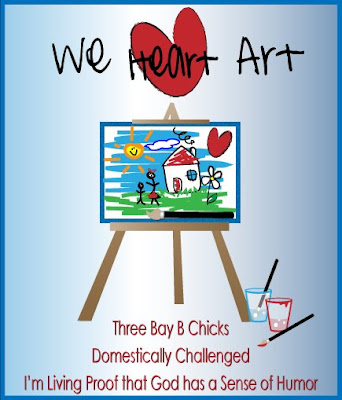 Together with Domestically Challenged and IÂ’m Living Proof that God Has a Sense of Humor, the Three Bay B Chicks will be hosting a week long Art Appreciation Week called Â“We Heart Art.Â”

The purpose? To promote art and being creative with both your kids and as individuals.

These three blogs are sponsoring an event called “We Heart Art” this week only, which gives you the chance to not only showcase your artwork or creative projects, but also your kid’s handiwork.

So get your posts ready! For all the details on how to link up your post via Mister Linky check out Three Bay B Chicks. Naturally, as with any carnival, there will be tons of fabulous prizes!

P.S. Three Bay B Chicks interviewed me on my boys art and all things crafty. Head on over to check it out.