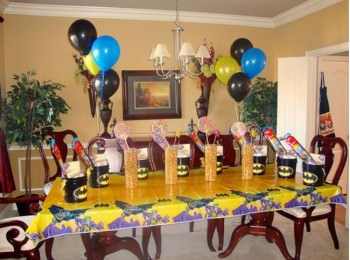 Over the weekend I threw my son a Batman birthday party. The first thing I did when he told me his theme, was to head on over to Tip Junkie and search for “batman” and “superhero”.  I hit the mother-load and decided to make the games correspond with a Superhero Academy theme. 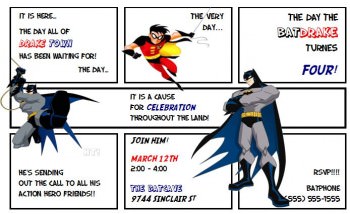 Here is Drake’s Batman Birthday Party Invitation that I made in Microsoft Publisher.  I printed each one on cardstock and then glued it to 5×7 blue paper to polish it off.  I’ve attached my version (as an example) as well as a fill-in-the-blank one that is printer ready for you to use. 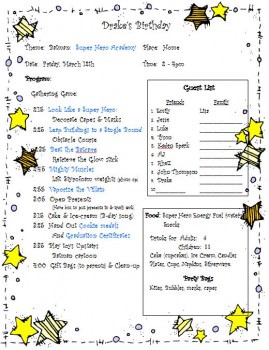 Tip:  I have found that with small children it’s good to have the activities planned out in 10 minute increments. Any longer than that and they get bored and problems happen. 😉  It’s also good to allow some free play at the end of each party so they feel like it was also a play date. 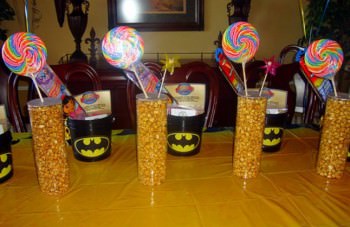 For the table decor I found these popcorn containers at Garden Ridge pottery for $3 and used the party favor buckets to incorporate the batman theme. 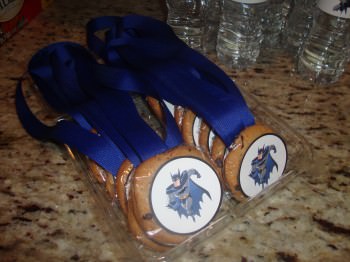 I made these cookie graduation medals for each child.  I awarded it to them at then end of the party.  I was old school and printed the batman circles onto cardstock and then hot glued the label onto the saran wrap onto the cookie.  I checked it out afterward and the cookie wasn’t effected.  {{just in case you were wondering}} 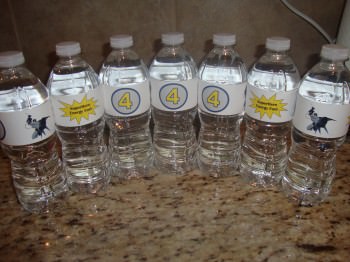 Everyone needs to stay hydrated during the missions. So each person had their own Superhero Fuel.  Tip:  You can write each guests name on them before the party as they get mixed up easily.

(In the Batman Energy Fuel file I gave you my version with a 4 on it and then I also gave you a blank circle version where you can write in your child’s age.) 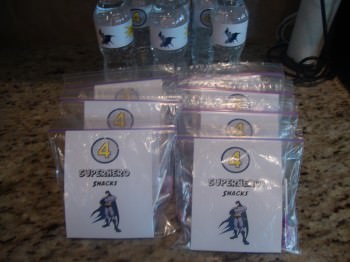 The party favor buckets were so big I needed some filler.  So I printed out the Superhero Snacks label on cardstock and filled it with sweet treats.  You can use them during the party with healthier snacks or with their party favor like I did.

(In the Superhero Snacks file I gave you my version with a 4 on it and then I also gave you a blank circle version where you can write in your child’s age.) 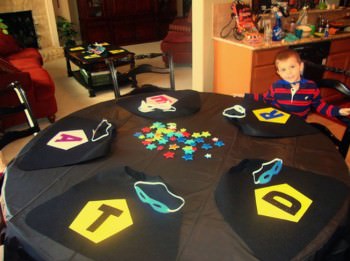 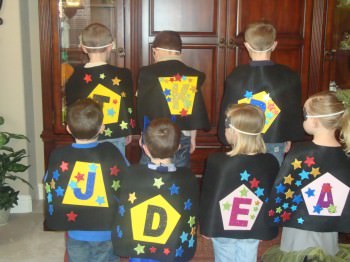 How to Make the Superhero Cape: 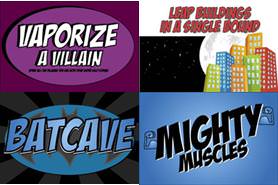 I printed out all of these fabulous signs for the games from Designer Girl 007.  I pasted them onto large blue poster board to make them bigger and really stand out.  They set the tone for the party and helped it run smoothly. 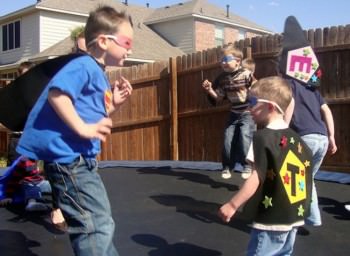 Leaping Over Buildings in a Single Bound

You can do an obstacle course but since my guests were 4 years old, I decided to let them jump on the trampoline.  They loved it and it helped to get their energy out first thing at the party.  Tip:  Take off their capes before they get on the trampoline – otherwise their stars and letters will start falling off. 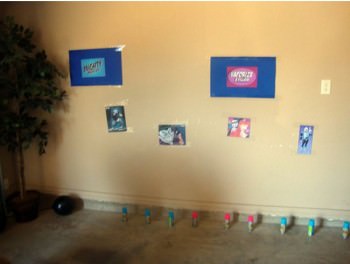 I made this really simple and hung several bad guys from the batman cartoon.  With $1 Store silly string we counted down and all went to town vaporizing as many villains as possible.  The kiddos loved it!  You can also use water guns. 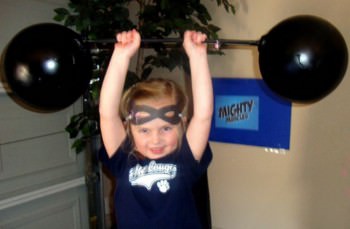 So show off their strength I made these fake dumbbell and used it as a photo op for each kiddo.  My camera was having problems focusing, but these pictures will be a perfect addition to the thank you note.

How to Make the Dumbbells:

You can pay $18 each for huge Styrofoam balls at Hobby Lobby.  However, I’m way too cheap for that.  I bought 2 large bouncy balls and a dowel rod.  I used a thick washer and duct taped the washer and ball to the dowel rod.  Lastly, I spray painted everything black.

Tip:  Walmart had $3 foam balls that I wish I had used instead of the bouncy balls.  They only stayed straight for 3 kids so it would have been better to have smaller balls but have the dowel rod stick into it so they stayed level. 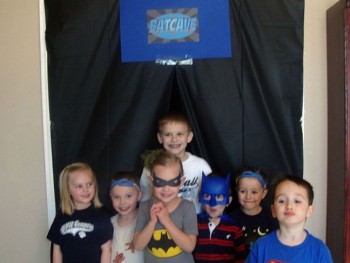 Retrieve Kryptonight from the Batcave

I used our media room as the batcave and strung black crepe paper all over the place to make a web.  Then I threw in glow sticks.  The mission was for each child to retrieve two glow sticks (kryptonight) from the batcave.  They got to keep the glow sticks and I put them into their party favor buckets. 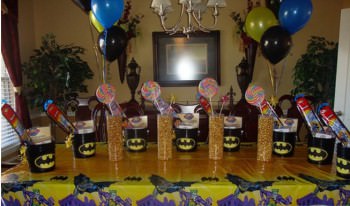 For the Superhero Party favors, I bought black buckets from the $1 store and mod podged a batman logo to the front of each one.  I mod podged the “superhero academy” logo from Designer Girl 007 on the back of each one as well.  To polish off the look I tied curly ribbon to one side of each bucket. 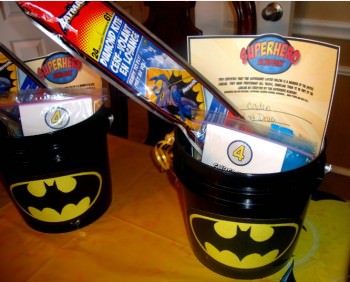 You an print out the Graduation from Superhero Academy Certificates from Designer Girl 007.  There were great filler for the buckets and each kiddo loved receiving it along with their cookie graduation medal.  You can have this as a ceremony at the end of the party, or just give it to them as their parents come to pick them up.

This birthday party was inspired by these blogs: