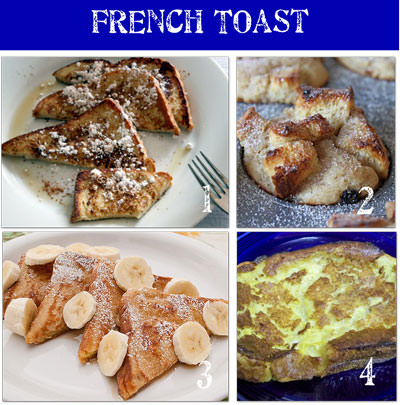 How to Make French Toast 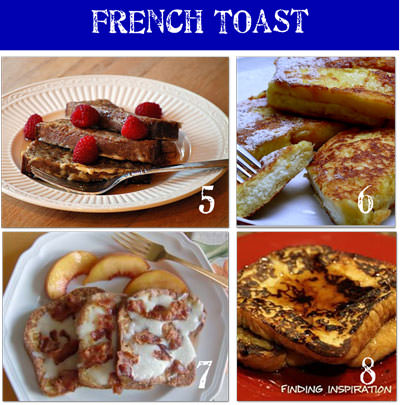 5.  French Toast with Raspberry Whole Wheat Bread – when MaMa ran across this recipe for Raspberry Bread and she put the whole grain twist on it.
6.  Cannoli French Toast – This is a simple idea, and it’s big on flavor.  It literally takes minutes to prepare and everyone will be singing your praises.

7. Gluten-free Savory French Toast – You must use a gluten-free bread that is soft in texture and has holes in order for the egg mixture to be absorbed.
8.  Banana French Toast – Make french toast by blending bananas for the batter. 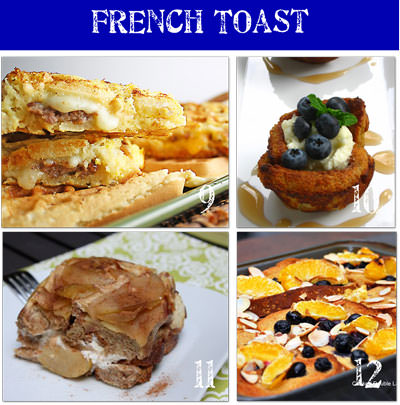 9.  Stuffed French Toast Waffle Panini – This version is the most unique, not to mention the easiest!  It works well with all types of fillings, so experiment with what you like best and take it from there.
10.  Blueberry Stuffed French Toast Bowls – I cooked my French toast completely before cooling it and baking it into French toast cups. I then filled it with the sweetened cream cheese filling and berries to finish the dish.

11.  Apple pie ricotta-stuffed baked french toast – This really tasted like apple pie yet consisted of such basic, quite healthy ingredients.
12.  Blueberry Orange French Toast – Baked french toast version that includes blueberries, oranges, and almonds while it bakes in the oven. 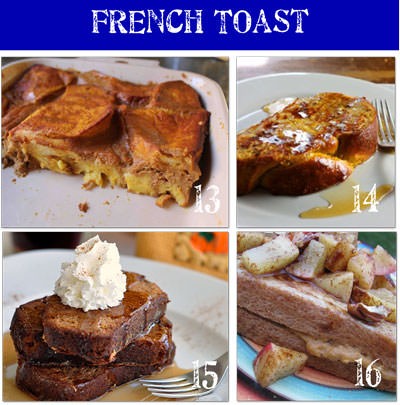 13. Pumpkin Pie French Toast – Even though it is totally decadent, I did modify it from traditional baked french toast recipes to make it arguably more healthy.
14.  Pumpkin Challah French Toast – This recipe is based on a per person serving, which makes two pieces. You can increase the recipe according to the number of people you will be serving.
15. Pumpkin Bread French Toast – I used my favorite pumpkin bread recipe and turned it into french toast.
16. Pumpkin Stuffed French Toast – For the topping today, I heated up 1/2 an apple with some cinnamon and then mixed it with 1/2 Tbsp of maple syrup and a couple pecans.