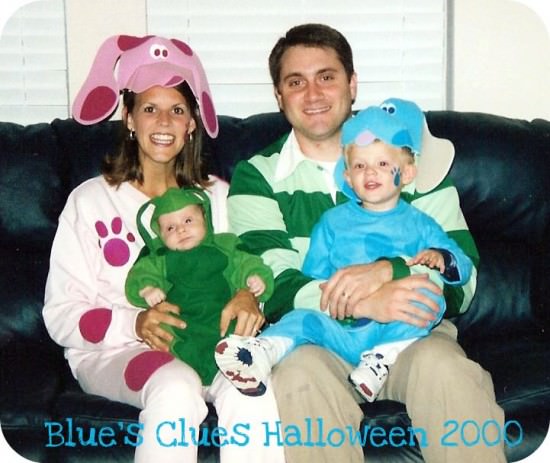 My family dressed up as Blue’s Clues in 2000

Halloween’s origins date back to the ancient Celtic festival of Samhain (pronounced sow-in) over 2000 years ago in what’s now called Ireland.  Halloween has long been thought of as a day when the dead can return to the earth, and ancient Celts would light bonfires and wear costumes to ward off these roaming ghosts.  You can learn more about the origin of Halloween over on History.com.

In the second half of the nineteenth century, America was flooded with new immigrants. These new immigrants, especially the millions of Irish fleeing Ireland’s potato famine of 1846, helped to popularize the celebration of Halloween nationally. Taking from Irish and English traditions, Americans began to dress up in costumes and go house to house asking for food or money, a practice that eventually became today’s “trick-or-treat” tradition. In the late 1800s, there was a move in America to mold Halloween into a holiday more about community and neighborly get-togethers, than about ghosts, pranks, and witchcraft.  Here are several games for children to play on Halloween. 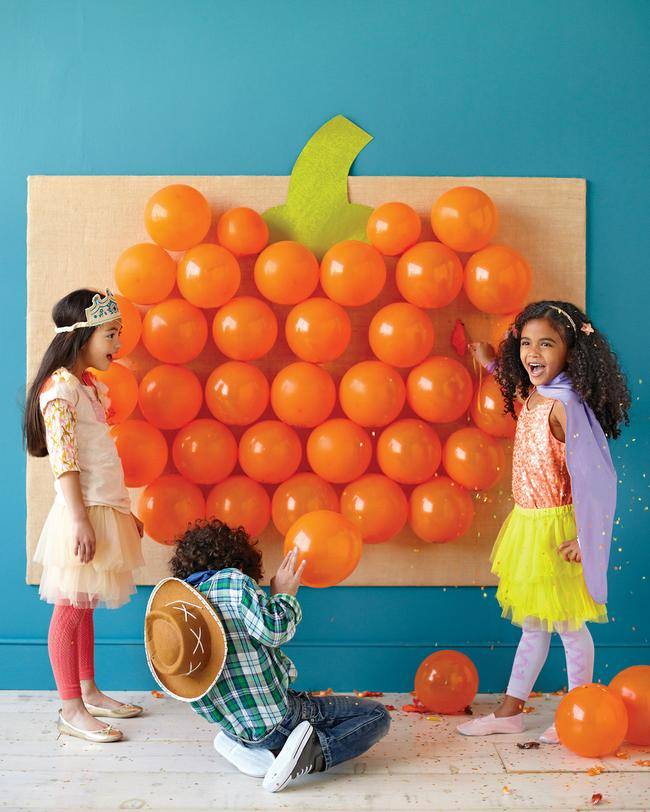 1.  Pop Goes the Pumpkin ~ This fun Halloween party game will make everyone pop with laughter.  Perfect for your neighborhood trunk or treat or a party in your own backyard, you could even use it for your trick or treaters by putting a piece of candy in each balloon. 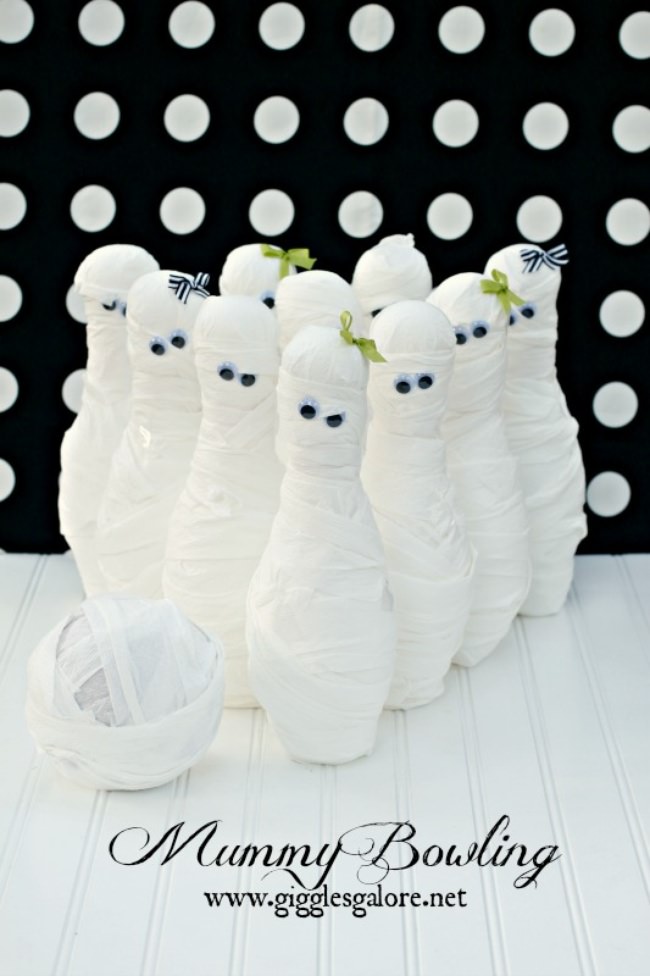 2.  Mummy Bowling ~ Are you planning a Halloween Carnival or Party? This is a classically, fun game idea with a Halloween twist! Follow this tutorial and youll have the perfect game for the young and young at heart! Who doesnt love bowling?! {wink} 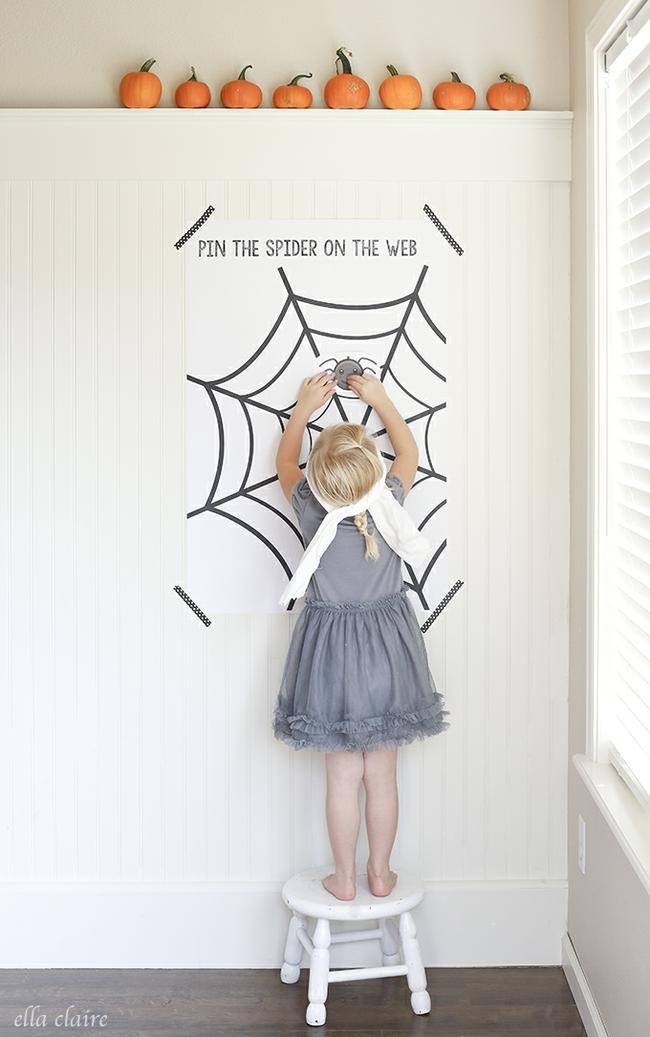 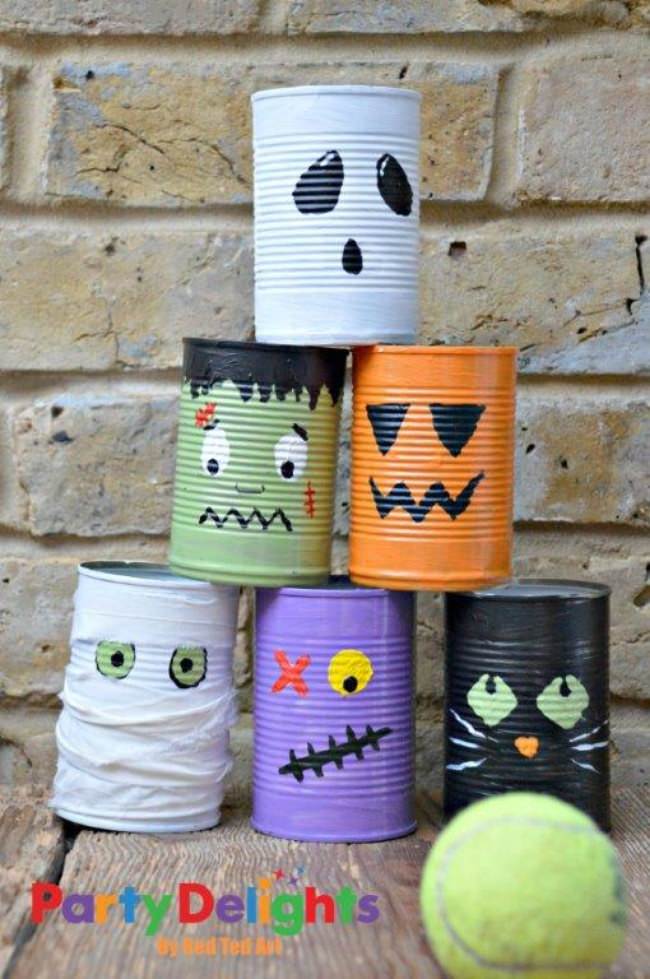 4.  Halloween Tin Can Bowling ~ This fun game is perfect for Halloween parties, birthday parties, family fun nights, or as a boredom buster for the kids when theyre not in school. In just 4 easy steps, youll have a quick and easy game that every child is sure to love. 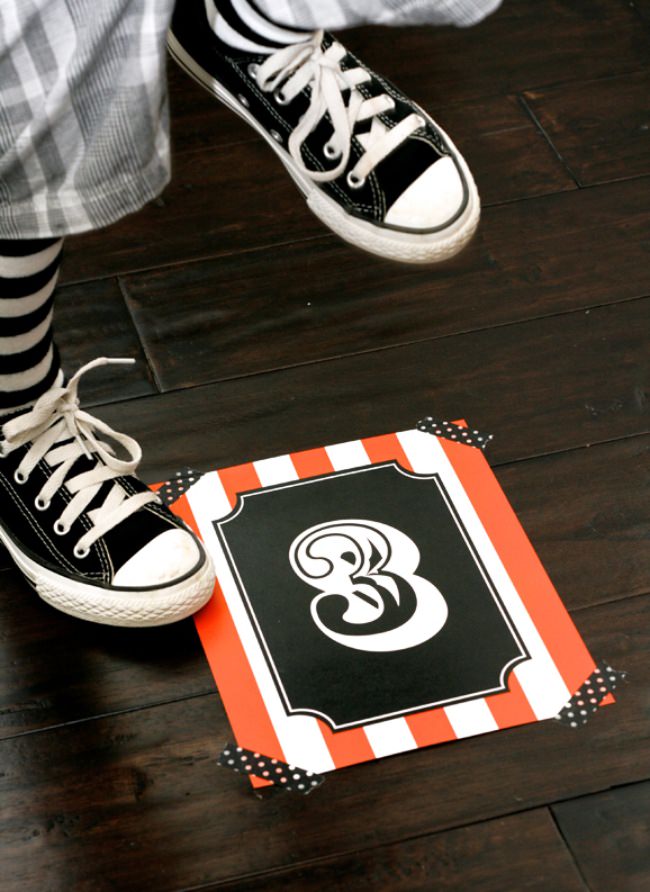 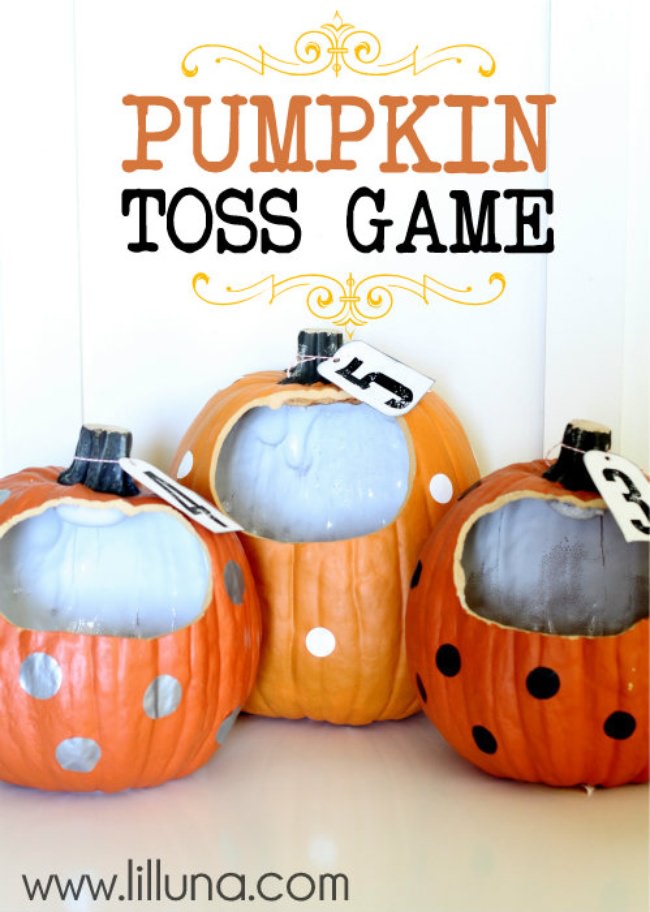 6.  Pumpkin Toss Game ~ How cute is this pumpkin toss game!? Easy to create with some pumpkins, paint, tags and vinyl. Great for a Halloween or Fall themed party! Check out this post for the full tutorial!

Divide children into teams. Give the first child on each team a spoon and a ping pong ball. Set up the course to where they have to carry the “EYE” on the spoon to the end of the course and come back. Hand off to the next child and continue until all children have played on the team. First team done wins!

9.  Spider Relay Divide children into teams. Set up a course for them to race on. Have first child of each team sit down, put their arms behind them and walk (AKA crab walk) to the end of the course and back. Tag the next child and repeat until all the teams finish.

10.  Ghost Waiter * Balloon for each team * Paper plate for each team Divide children into teams. Set up a course for them to race on. The child has to balance a balloon on a paper plate while walking it down the course and back to their team.

13. Spook Spotter If you have a large group, you can try in a game of Spook Spotter. Its one of those games; inside Halloween is actually a game very quiet.  To start the game, children form a circle. One child is chosen to be the ghost spotters. The Spook Spotter leaves the room or turned back, while a child is from the district selected for Spook. Spook selects the repetitive, rhythmic movements, without their seats. Movements could include, floating phantom movements, jerky movements zombie, and witch on her broom movements, witch stirring a brew of action. Spook encouraged being creative with his actions. Once each copy Spooks action begins the Observer returns to the room and the group observed. The Spook Spotter has the task of guessing who is Spook in three cases. Spook changes of the action as often as possible without being seen by the observer. Each copy follows Spooks actions. After three hypotheses or assumptions Spook Spotter identity, a new game begins with a new spotter and a new Spook are chosen. Children need encouragement to not spook as this give the game, look for the observer. Instead, they can analyze the group change and movements, if they notice any change in their movements.

14.  Halloween Whispers A Halloween indoor games can be played with a large group. This is a Chinese version of the game Whispers. Firstly, all children have a claim on a whole piece of paper. Do not let them show their sentences and the third supervisor collects the sentences. The children sit in a circle and the supervisor is one of the games of a child in a circle. The child reads the sentence and whispering to the person next to them, whispering, then the next person. This continues around the circle until it reaches the last person, then the group, which is the set, tells achieved. Up to this point, the sentence of the rule has changed, and there will be lots of laughter, that the distorted version is said to the group.

15. The Trick or Treat bonanza Cut up some paper strips and on half of them write the word “treat”, on the others write out a number of tricks, such as “hop on one leg”, “growl like a lion” or “sing their favorite song”.  Put all of the paper pieces into a hat or a pillowcase and hide some sweets and candies around the room.  At the party ask each child to draw a piece of paper from the hat. They then have to perform the trick or search for the treats.

16.  Halloween Hangman This popular spelling game is ideal as a Halloween game. The traditional hangman diagram can be used and is most appropriate for this time of year. It can be played in the usual way but instead of using any word, a Halloween themed word can be used. You might use the words vampire, witches, potion and haunted. A slightly different version can also be used. Instead of using just a word that has to be spelled out, try using a whole sentence. Create a spooky, Halloween themed sentence like, As we walked along the deserted road a fog surrounded us and we heard an eerie wailing close behind. Draw a dash for every letter of the sentence leaving a space between the words. The game is then played in the same way as the traditional game. You probably wont get much of the hangman drawn but it is a good educational Halloween game that gets kids using their spelling skills as they try to work out the words in the sentence.

17.  Guess the Gruesome Object For extra thrills, the host may place a simple object in a large cardboard box or tube with holes cut in each end. The guesser must place the hands inside the holes and guess the object. The twist is the host can place an object that could easily be something more sinister. A wet flannel or a wig could easily be a dismembered hand or a hairy spider. The guesser must try to overcome the suggestions of the cruel host and guess the object. (All objects must be harmless and mundane.) 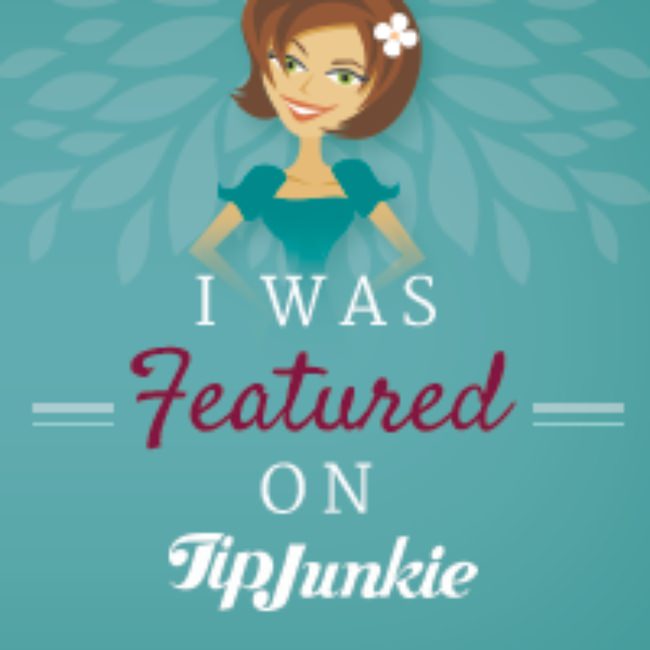 Thanks Ladies ~ I just adore these pictured tutorials! I’m honored to be able to feature you and send you over some new readers. Feel free to share your ‘I was featured on Tip Junkie‘ badge on your blog, Facebook, or Instagram. You earned it!  {knuckle bumps}

If you’re looking for something specific, you can type in any word or topic in the Search Box where you’ll receive hundreds of DIY and how to make tutorials.