Where the Dinosaurs Roam is a darling lesson on manners for young kids.  You’ll get to know Tattle-achodon, Rude-rex, Yelling-adactyl and many more.  Print out the story and the dinosaurs on colored paper and tape onto large popsicle sticks to make a quick Family Home Evening lesson or fun activity for kids. 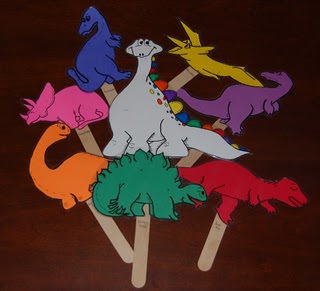 Where the Dinosaurs Roam Story:

I went to a land, not far from here where dinosaurs roamed with manners I’d fear.

First of all I came across STINGY-STEGO. He’s big and greedy. He thinks he should always be first in line, first one to play games, first one to eat, fist one for everything.  He acts like he’s the only one that’s important.  He turns green with envy if you have something that he doesn’t.  He gets upset until he gets his way, then he’s happy.  However, by then everyone else is miserable.  But hes too greedy to realize that.

I quietly sneaked out of STINGY-STEGO’s and no sooner had I done this, I came upon an ANGRY-OSAURUS.  Now he’s okay to be around if he’s in a good mood.  He can be more fun that a truckload of dinosaur tracks when everything’s going his way.  But if it doesn’t, you better watch out because then he gets angry and pouts.  Let me tell you some of the things that upset him and makes him feel sorry for himself.  If he feels like his mother makes him do more chores than anyone in the family, then he pouts.  If his teacher doesn’t call on him first, then he pouts.  He seldom has fun because he’s too busy pouting.  Do you happen to know any ANGRY-OSAURUS’ in your land?

Better watch out, here comes TATTLE-ACHODON better known an the whine-osaurus.  Shes always on the look out for something or someone to tattle on.  She doesn’t play with the others a lot because shes too busy trying to catch them doing something wrong.  Then her favorite thing to do is go whining to a grown-up.  They won’t play with me. She called me names.  He hit me.  It”s a good thing her feet are so big, so she doesn’t have to take so many steps running in and out whining and tattling.

After coming across the whine-osaurus.  I decided this trip into the land not far from here was pretty exhausting, so I stopped for a quick picnic lunch high up in a tree.  All of the sudden I could hear this terrible noise.  It was the well-known YELLING-ADACTYL, and boy was he noisy!  You could hear him wherever he was. In fact, when hes around its   impossible to hear anyone else!  He zooms and yells wherever he goes.  He may not be big, but hes loud.  Have you ever heard the voice of the YELLING-ADACTYL before?  I climbed out of that tree as quickly as I could.

Boy, I didnt know which way to go; no matter what way I turned I seemed to come across something I dreaded.  Wouldn’t you know that the next one I’d see would be RUDE-REX.  He wants to be the center of attention.  He doesn’t think it’s important to say please or thank you.  He doesn’t ask permission. Do you know what he did?  He just grabbed my lunch!  When it’s time to be quiet, he talks real loud.  He even burps real loud just to be rude because he thinks it’s funny.  He doesn’t have any manners and if hes not careful, pretty soon he won’t have any friends. Have there been any sightings of RUDE-REX near your place?

Oh, I hope you’re feeling sympathetic today, because here comes POUT-ASAURUS.  Shhhh!  Be real careful what you say around her because she gets her feelings hurt real easy.  She is always discouraged and sad about something.  She feels bad because she says she cant draw as well as everyone else or because she can’t spell as well.  She gets her feelings hurt if someone cant play with her.  Nothing much looks good to POUT-ASAURUS.

Oh-oh.  I think I see BUTT-IN-BRONTO.  I better burry and talk before he gets here or he will butt-in and then I wont get a chance.  Whenever anyone tries to talk when he’s around, BUTT-IN-BRONTO butts-in and talks louder and takes over the whole conversation.  You dont get much of a chance to talk when hes around.  I wish BUTT-IN-BRONTO would just butt-out.

Oh, my goodness, here comes POKY-CERATOPS!  I almost forgot about her!  She is always late.  She pokes around until the last minute and then she can’t catch up.  She makes her mother call her and call her trying to get her up in the morning.  After she gets up she plays around getting dressed and eating breakfast.  Then shes the last one out the door.  She’s the last one to school, the last one to dinner, shes even the last one to play.  Have you seen a slow POKEY-CERATOPS in your territory?

Well, it sure has been a long day. So I stumbled to my feel, and slid my backpack on and decided to head home when I came upon the most gorgeous sight you have ever seen!  I had seen miserable faces all day long and I couldn’t believe my eyes!  I saw the biggest most  colorful dinosaur of all.  It had a smile on it like you wouldn’t believe. I quickly reached inside my backpack to pull out my book on dinosaurs.  I learned that it was the HAPPY-OSAURUS.  And that he’s everyone’s friend.  He’s courteous and friendly. He never interrupts.  Nor is he stingy, he’s always willing to share.  He never pouts, and he rarely tattles or whines. Sure of course sometimes he feels sad and discouraged; that’s only natural. But he doesn’t carry it to extremes.  And he feels real bad when hes late and makes other’s wait for him.

I’ve been thinking, I guess I know what makes HAPPY-OSAURUS different than the other dinosaurs, and the kind of friend you’d like roaming in your valley.  Hes polite, friendly, well behaved and most of all he’s happy!  He’s the kind of guy that knows that hes special too!

I sure hope that you’re lucky enough to have a lot of HAPPY-OSAURS living in your place.  Because to be rude and inconsiderate is like living in the age of the dinosaurs.  The dinosaurs are extinct and I hope bad manners in your home are extinct too.

Download the Dinosaurs and Bones from Blog My Heart and Home