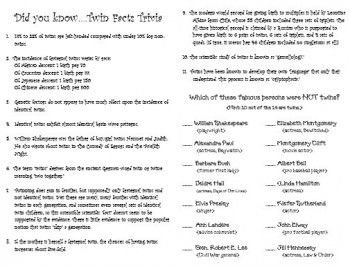 Did you know Twin Facts Trivia

3. Genetic factors do not appear to have much affect upon the incidence of identical twins.

5. William Shakespeare was the father of boy/girl twins Hamnet and Judith. He also wrote about twins in The Comedy of Errors and The Twelfth Night.

6. The term “twins” derives from the ancient German word twin or twine meaning “two together.”

7. Twinning does run in families, but supposedly only fraternal twins and not identical twins. Yet there are many, many families with identical twins in each generation, and sometimes even several sets of identical twin children, so this ostensible scientific “fact” doesn’t seem to be supported by the evidence. There is little evidence to support the popular notion that twins “skip” a generation.

8. If the mother is herself a fraternal twin, the chances of having twins
increases about five-fold.

10. The scientific study of twins is known as “gemellology.”

11. Twins have been known to develop their own “language” that only they understand. This process is known as “cryptophasia.”